Spinal Disc DegenerationSpinal disc degeneration is a common problem as people age. While age is a factor, poor posture,   couch potato syndrome and lack of exercise are also contributors. Regular massage to re-align the spine and break up adhesions are very effective at increasing blood flow and restoring flexibility to the spine.

The myoskeletal alignment techniques developed by Erik Dalton which I use in my therapy sessions specifically target the vertebra, discs and the tiny muscles that connect them.

Now there is good news for people who have let their backs go or whose backs are too far gone for  traditional massage or physical therapy to help.  There is a new liquid gel injection that  may stop or  reverse the degeneration of spinal discs. 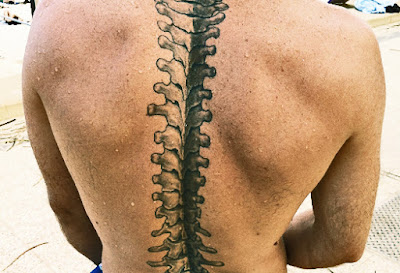 DUKE (US) — A new biomaterial that changes from a liquid to a gel after injection may stop or reverse the degeneration of spinal discs, researchers say.
The health conditions affect thousands of Americans. To use cell therapies, however, scientists have to keep the cells alive, synthesize the appropriate replacement material, and get it to the right place in a patient’s spine. With newly made biomaterials from Duke University’s Pratt School of Engineering, that goal could be closer.
In a proof-of-concept study published online in the journal Biomaterials, graduate student Aubrey Francisco and biomedical engineering professor Lori Setton describe a new biomaterial designed to deliver a booster shot of reparative cells to the nucleus pulposus, or NP—the jelly-like cushion naturally found between spinal discs. The NP tissue distributes pressure and provides spine mobility, helping to relieve back pain.
“Our primary goal was to create a material that would be liquid at the start, gel after injection in the disc space, and keep the cells in the location where they’re needed,” Setton says. “Our second goal was to create a material that would provide the delivered cells with the environmental cues to promote their persistence and biosynthesis.”
Disc degeneration
Disc degeneration is a common problem as people age. Over time, the soft, compressible discs that work as the spine’s shock absorbers break down. Although this intervertebral disc degeneration can occur anywhere along the spine, it mainly happens near the neck and lower back, causing intense pain. Individuals with this condition can also develop herniated discs, osteoarthritis, or spinal narrowing, known as spinal stenosis. 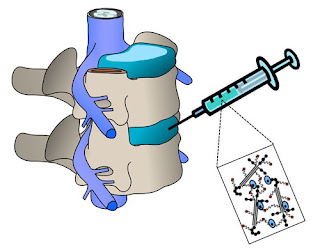 In the new approach, therapeutic cells are delivered to degenerated intervertebral discs within a biomaterial carrier that keeps them from leaking out of place. (Credit: Aubrey Francisco) Previous lab research has shown that re-implanting NP cells, or even stem cells, can delay disc degeneration. Several companies already offer cell delivery strategies, but the methods are poor and ineffective. “They allow the cells to quickly migrate out of and away from the injection site,” Francisco says. Cells stay put The team’s delivery strategy keeps the cells in place and provides cues that mimic laminin, a protein in native nucleus pulposus tissue. Laminin is normally found in juvenile but not degenerated discs and allows injected cells to attach and remain in place with the delivered biomaterial. Laminin may also enable the cells to survive longer and produce more of the appropriate extracellular matrix or structural underpinning of the discs that help stop degeneration, Setton says. The researchers developed a gel mix designed to reintroduce NP cells to the intervertebral disc (IVD) site. The gel mixes together three omponents: the protein laminin-111 that has been chemically modified and two polyethylene glycol (PEG) hydrogels that can attach to the modified laminin. Separately, these substances remain in a liquid state. The gel, however, holds the cells in place upon injection. The National Institutes of Health funded the research. Source: Duke University Original Study DOI: 10.1016/j.biomaterials.2013.06.038